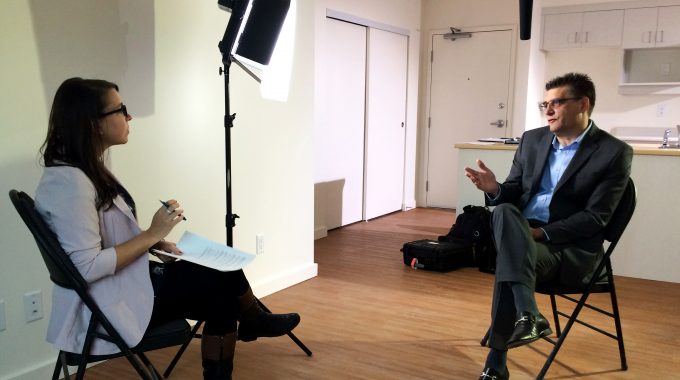 Canada Mortgage and Housing Corporation (CMHC) is shining a spotlight on M’akola in an upcoming video series on Governance.

“We are excited to be showcased in these videos and honoured that CMHC is giving us a platform to share our story,” said M’akola CEO Kevin Albers.

When CMHC set out to find non-profit housing providers to be featured, “M’akola was highly regarded in this issue,” said Elyse Van Herk, CMHC Officer of Product Development and Visibility. CMHC approached M’akola with the opportunity.

M’akola will be featured in a number of videos in the CMHC video series.

“What M’akola is doing makes a lot of sense. Some of the best ideas sound so obvious when you hear someone else explain them,” said Van Herk. “These videos will help teach smaller organizations about professionalism, standards, and to keep the objectives in mind.”

Van Herk and a camera team travelled from Ottawa to Victoria to film M’akola. She has been working to showcase stories of non-profit organizations and co-op housing organizations so that others can learn from their successes.

“It’s exciting M’akola has been asked to share our experiences and to contribute to the Aboriginal Housing sector.  We want the sector to continue to grow and serve families in need,” said Albers.

The videos are set to be released in April on the CMHC website and other CMHC social media sites.

Published by Saanich News on January 11, 2016 Written by Travis Patterson Saanich is looking…